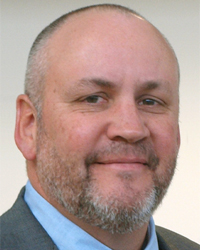 Douglas S. Fugate, MD joined the Center for Orthopaedics & Sports Medicine in October of 2000. Dr. Fugate is a native of Punxsutawney, Pennsylvania. He received his medical degree from Hahnemann University of Health Sciences in Philadelphia in 1984. In 1990 he completed his four-year orthopaedic residency in the United States Army, Tripler Army Medical Center in Honolulu, Hawaii. He was chief of the department of surgery at the General Leonard Wood Army Community Hospital, Fort Leonard Wood, Missouri and served in Operation Desert Storm as staff orthopaedic surgeon in Saudi Arabia from January 1991 to April 1991.

Dr. Fugate practiced as an orthopaedic surgeon in the Philipsburg, Pennsylvania area from 1995 until September 2000 and was also chief of the surgical department at Philipsburg Area Hospital from March 1994 through June 2000.

You can view a pdf of Dr. Fugate’s Curriculum Vitae here.